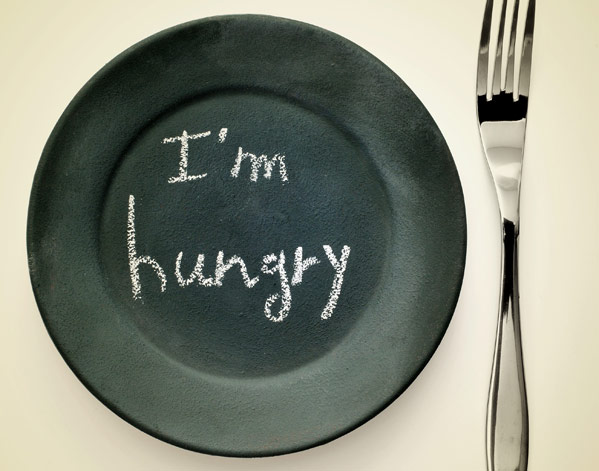 Have you ever had the experience of being hungry even though you know you shouldn’t be? For many of my patients, this is very discouraging and a major obstacle in successfully losing weight. The regulation of hunger is a complicated and interesting process in the human body. Our systems are designed to have hunger stay “on” unless something happens to turn it off. This makes sense in an environment where food is scarce, to avoid starving to death. However, this wiring can work against us given the environment we live in today. To illustrate how easy it is to turn hunger on, and complex to turn it off, we need to discuss the messengers involved. It only takes one hormone, ghrelin, which is produced by the stomach, to make a person hungry. In contrast, we produce at least nine different hormones and peptides in our gastrointestinal system, pancreas, and fat tissue that all work together to tell our brains that we are NOT hungry. A malfunction of any of these can lead to being inappropriately hungry.

I want to focus on just one of these hormones – insulin. Insulin is the hormone that is produced by the pancreas mainly in response to intake of carbohydrates (sugars and starches). Its primary job is to push sugar out of the blood stream and into a cell, where it can be used as fuel. Insulin also is a very important messenger in the hunger system. Insulin should only be active right after we have consumed food and when it is working properly, it turns down hunger.

Insulin’s message is, “You can stop eating”…and it works very well as long as the message actually makes it to the brain. The reason that might not happen is a condition called insulin resistance. Insulin resistance means that when insulin connects to a cell, the effect it would normally have doesn’t happen nearly as well or as quickly.

If the cells in the part of our brain directing hunger signals are insulin resistant, they won’t produce enough of the substance that is needed to make us feel full. This means it takes a lot more insulin to turn off hunger, so we keep eating even though we have actually already had enough. Additionally, once insulin levels start dropping, hunger turns right back on. This can be very frustrating when we know we shouldn’t be hungry yet.

Fortunately, insulin resistance can be improved and in some cases, reversed. Nutritional changes like reducing sugar and starches will help. Muscle building exercise improves insulin’s function. Some medicines, like steroids, make insulin resistance worse, while others, like metformin, can improve it. Reducing hormones, like cortisol, through adequate sleep and stress management is helpful.

Although there are many reasons that a person’s hunger signals may not be working properly, insulin resistance is very common and is relatively easy to diagnose.